Timeline History of CICS
2000
Churches Together in Central Halifax were looking at potential Millennium Projects - one of the ideas was a schools worker to work in Secondary Schools across Calderdale with young people aged 11-18. An information night was held at Ebenezer Methodist Church with talks from schools workers in neighbouring towns. John Hoyle took the lead to move the vision forward into reality...
​2003
After 3 years of planning and fundraising the trust was formed and Christian Initiative in Calderdale Schools was born! Youth events were held around the Borough as a launch.
​2004
CICS first worker was employed - John Settatree from Wales (now leading Scripture Union in Wales) started to make links into the Borough's Secondary Schools with Rastrick High and Brighouse High been the first schools CICS worked in (thanks to 2 trustees Mark Stephenson and Lorna Aitken). Pictured below John on his first day having the grand tour of Calderdale! 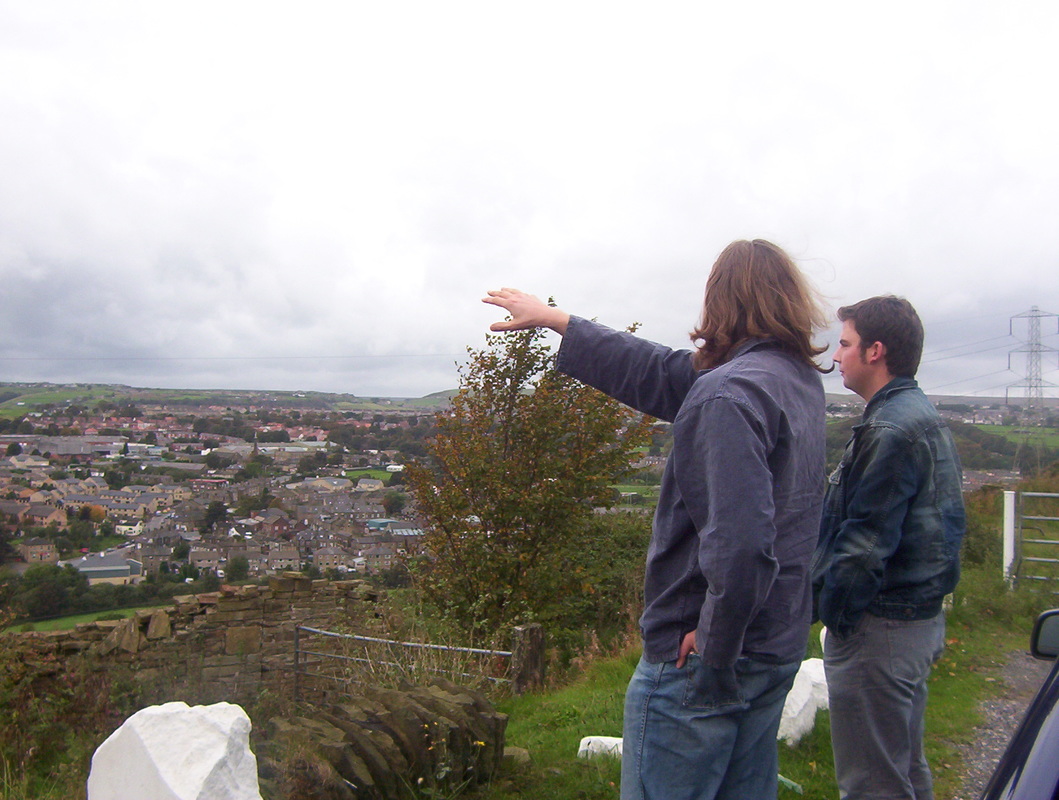 ​2005
CICS organised e-Merge, a training course for young people which helped them share their faith with their friends. CICS was also involved in a large youth gathering with "In Yer Face" theatre.
​2006
The Halifax Gala saw the Christian Motorcyclists Association lead the way in the procession (though travelling at 5mph is difficult for a bike!) John Settatree, pictured below at the Halifax Gala, moved on from working with CICS. Tony Buck, a former pupil of Brighouse High School, become the new CICS worker. CICS helps start-up X:Site - another ministry of Scripture Union aimed at Primary School aged children.
​2007
CICS was involved in the "Hope 2007 Youth Tour" event and also started running Youth Alpha courses. We welcomed Mike Smithers a Church Army Trainee on a 6 month placement. Beth Bentley (pictured below - hosting Battle of the Bands) from Rock Church York came on board as a second worker and ran events such as Battle of the Bands (schools competing against each other - well done Websters Interiors who won!),  Soul Rush (a girl's group) and P:Form a 3 day non-residential camp. CICS was also at Halifax Gala - here are volunteers Kate, Sarah, Liam and Tom with Tony (pointing at the CICS sign!)
​2008
The It's Your Move booklets to help with the transition from Primary to Secondary Schools were launched with thanks to Elsie Russell from New Beginnings Church, Ovenden. Beth left CICS in late 2008 to become a youth worker at Rock Church in York. CICS organised a very successful RE day for Trinity Academy with students (pictured below - the fourth picture includes John Hoyle who was instrumental in the early days of CICS and was a trustee until he moved away from Halifax in 2011)
​2009
Esther Woolcock joined CICS as a worker. Esther wrote some resources for Scripture Union and, with Tony, led CICS first residential away (at Westwood Christian Centre). CICS held another successful RE day for Trinity Academy students - pictured below! A few supporters of CICS organised as black tie dinner at Berties, Elland to raise money for our work (and we found out our workers scrub up well as suits and ball-gowns were donned!)
​2010
CICS launched its Partnership Scheme to better engage with those who support and pray for our work. This led to local churches and supporters becoming more involved in fundraising - pictured below David Ingram from Northowram Methodist becomes a chauffeur and the 2009 Annual Barn Dance takes place.
​2011
Esther moved on and CICS employed Laura Woodfine to lead on Mentoring (Laura also carries out detached youth work in Halifax Town Centre). CICS were part of a special event with Archbishop of York John Sentamu at Trinity Academy - pictured is Geoff Gilling from Churches Together, Paul and Tony from CICS with the Archbishop. 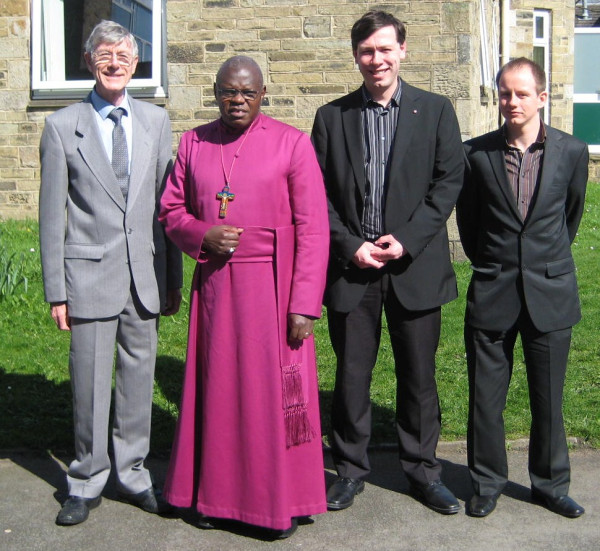 ​2012
CICS employed a second part time worker to work alongside Tony and Laura - Chris Mason. Chris was a former pupil at Rastrick and worked alongside Laura as a Youth for Christ Calderdale worker. CICS worked with Street Angels to produce the Alcohol and Safety Education pack (below Tony training Street Angels groups from across the UK to deliver the alcohol training at the CNI Network conference). Picture below one of the Friday afternoon catch-up sessions... 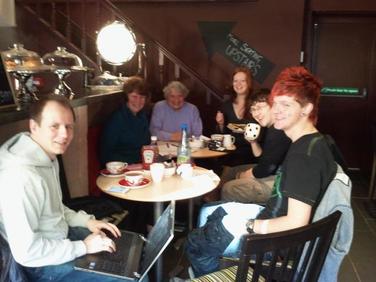 ​2013
CICS organised a Love Easter event which was held in several schools in Calderdale (pictured the team at Trinity Academy). The third picture shows Tony, Chris, Ruth and Laura - our four workers!
Tony offered training to Street Angels groups from across the UK at the CNI Network conference to help people deliver the alcohol training to schools and young people across the UK (pictured below).
​2014
CICS expanded its vision towards Primary Schools and a generous donation from Providence United Reformed Church allowed us to employ Ruth Wyeth to develop this work and build up resources for others. Open The Book was one of the new areas of work that CICS volunteers are now part of in several Primary Schools (pictured). CICS also started to promote the idea of church and school links. Chris Mason left CICS to become the youth worker for the Methodist Church in Kirklees. 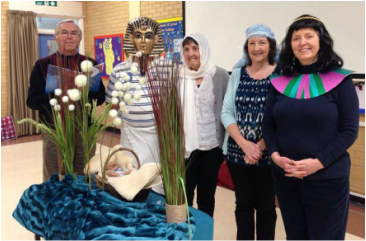 ​2015
CICS joined with Halifax Minster to organise Engage - a conference to equip, resource and support church's engagement with schools - which attracted people from across the North of England (pictures below)
CICS also held a training evening at King's Church with Scripture Union and the first of an Annual thank-you event for volunteers and supporters of our work (pictured below). After being full time worker since 2006 Tony Buck moved on to become Youth Engagement Officer with The Football League Trust. Neil Harris became the new CICS worker - Neil is also a part time pastor in Keighley and has over nine years of youth and schools work experience. Ruth left CICS because of additional family commitments. ​Full width picture is the trustees and Laura at the goodbye meal for Tony and Ruth. 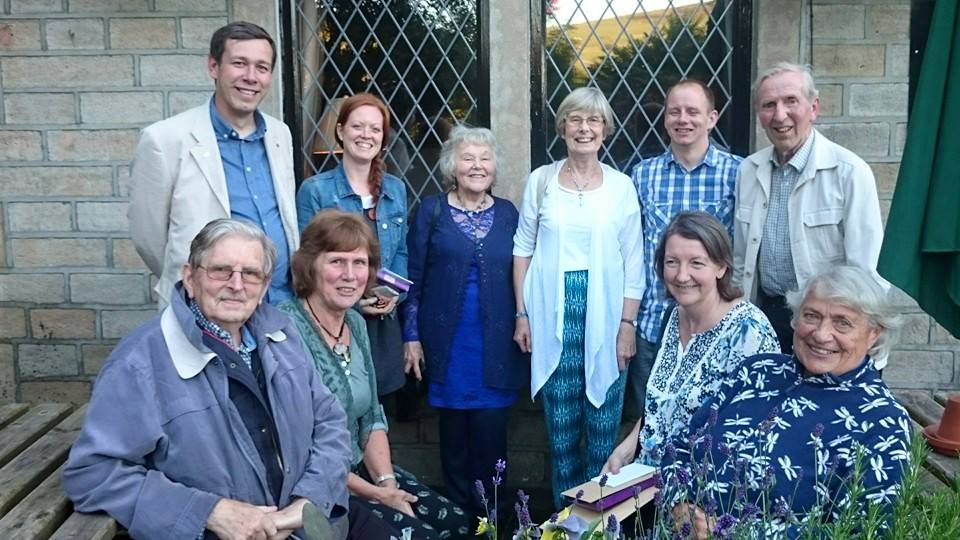 ​2016
CICS continues to look to the future as a Trustees Vision Day sets out a 3-year plan for the organisation. We said goodbye to Laura in September as we said hello to Angie, Karen and Nancy who join CICS as Primary School workers (we initially wanted to employ one primary school worker but we had three excellent and very strong candidates with very different giftings so we employed all three!). We are working in some new Secondary Schools and increasing our offer of resources.  In November we were the winners in the National Inspire Awards 2016 Children/Youth Initiative. Four of the CICS team visited the Houses of Parliament to collect the award. 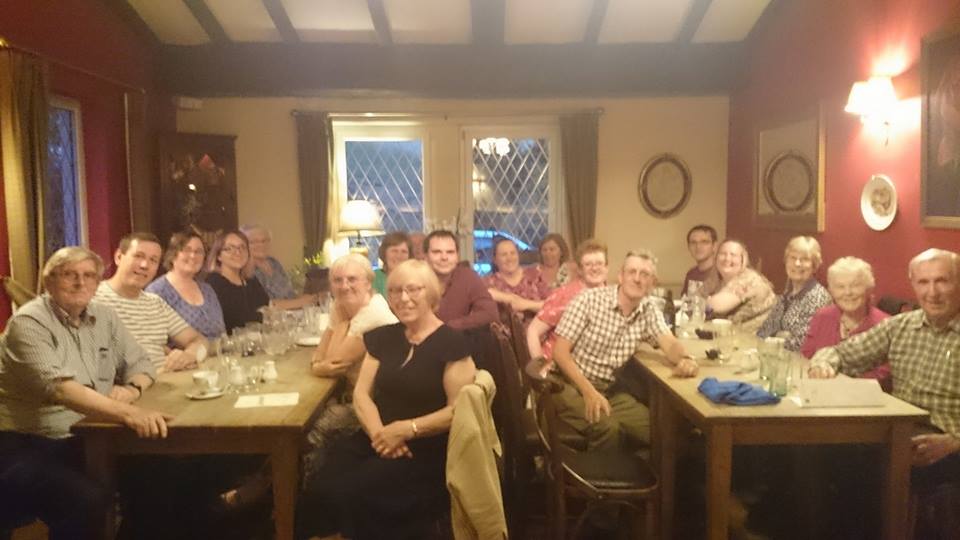 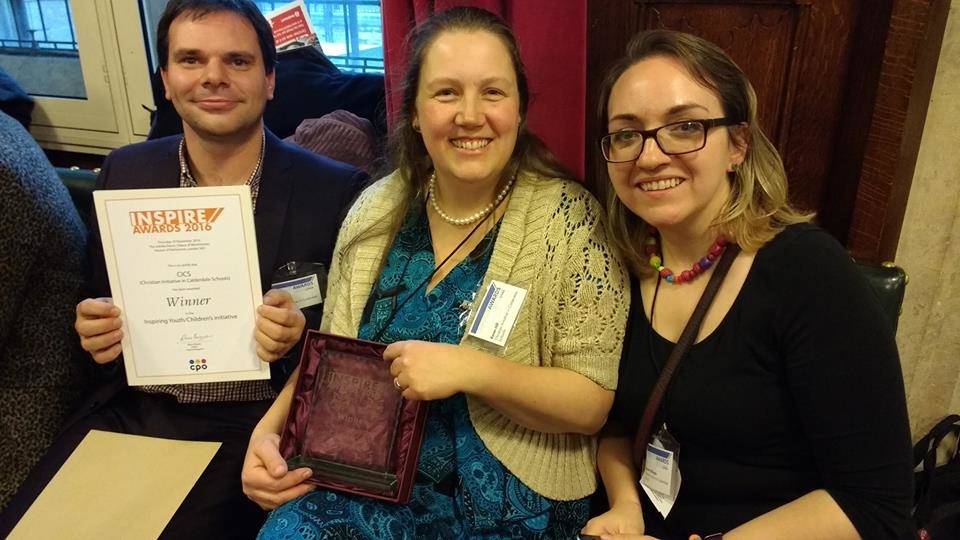 The year started with a big gig at a Halifax nightclub with Twelve:24 out of which came The Fuse, regular gatherings for young people exploring the Christian faith. Our Primary Team handed much of what they were doing over to local church volunteers with some amazing projects set up by then. The work in Todmorden opened up with opportunities in both Primary and the High School.

CICS underwent a rebranding and became known as simply Christians in Calderdale Schools (which is what most people called us anyway!!!). The team worked to deliver more lessons in schools and some new opportunities for Question Point opened up - so much so in September we appointed a new worker Sarah Stone from Halifax Elim church.
2019:

We said goodbye to Neil in September as he moved on to pastures new in Middlesbrough. Our work in schools continues to grow with us becoming much more integrated in the life of a few Secondary Schools in the Borough. A Supporters Evening in November seeing almost 40 people attend to hear stories from the workers in schools as well as our vision for the future and an update from Scripture Union. The Its Your Move book had a new look in terms of the book and contents and also the support CICS offers to those who faithfully deliver the book to those making the transition from Primary to Secondary. CICS spent the latter part of the year planning our 20th Anniversary celebrations where we aim to run 20 events in 2020! 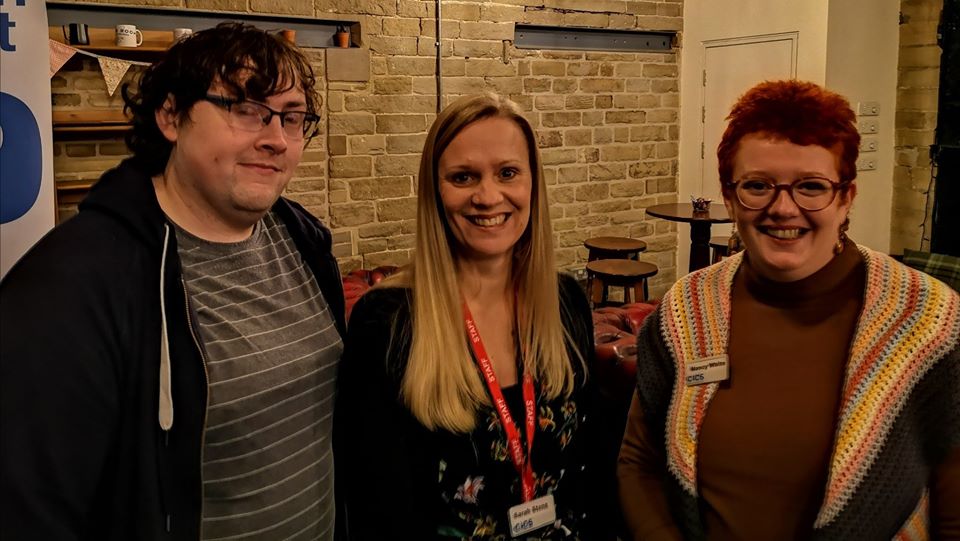 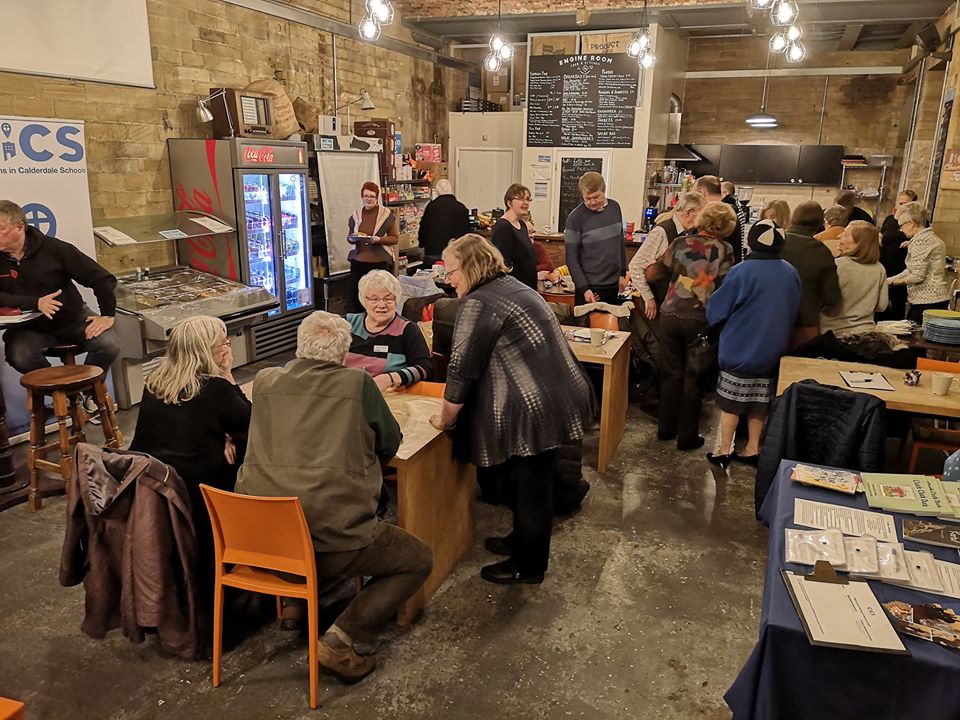 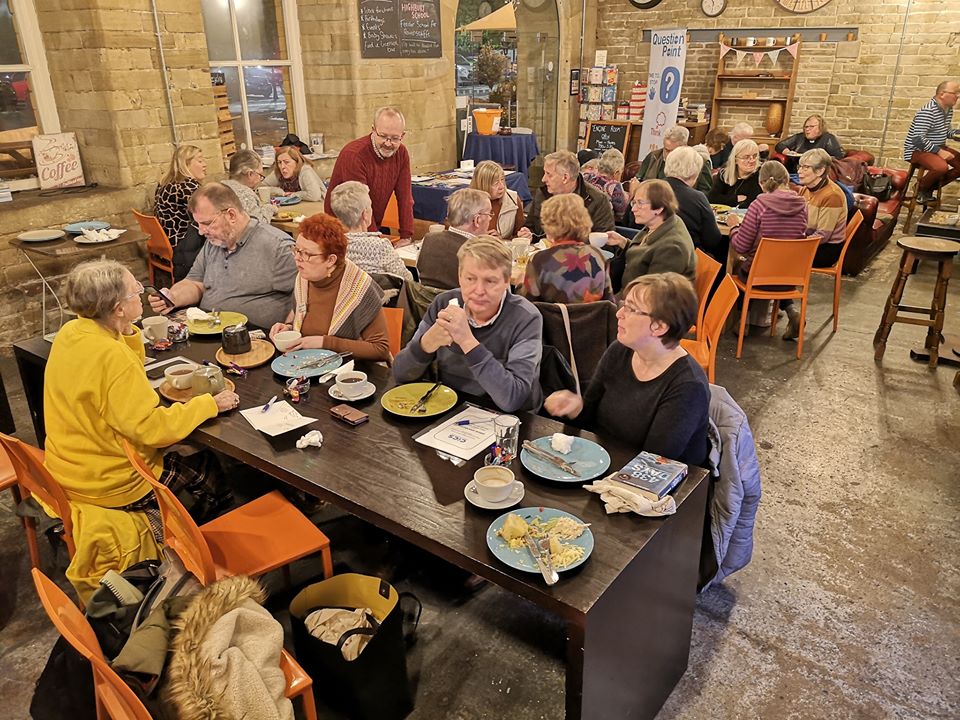 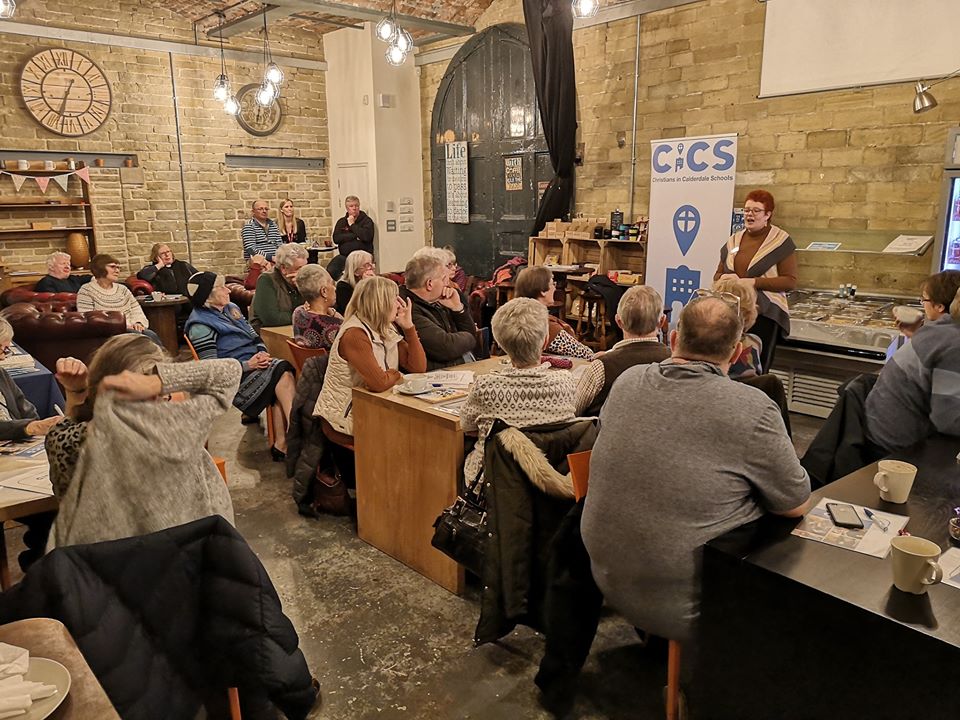 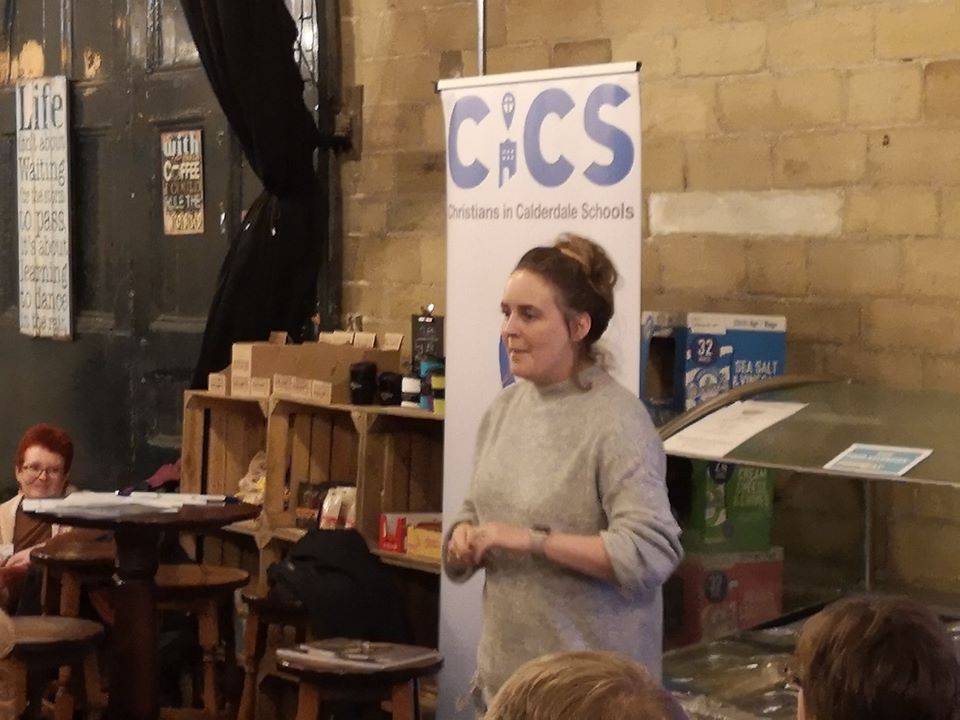 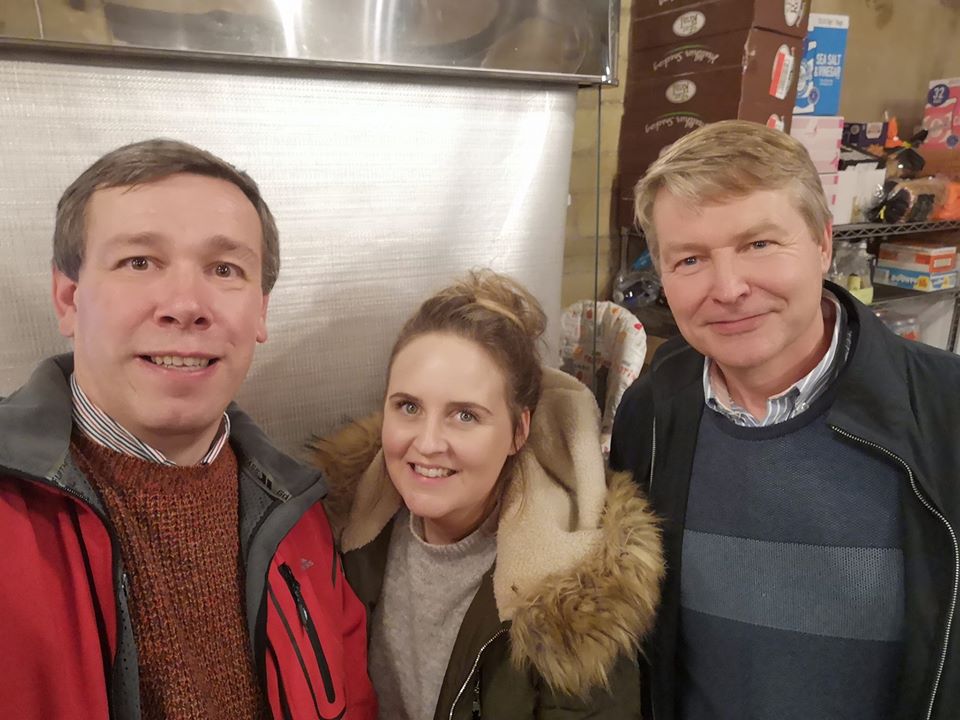 ​
Rogues (sorry Workers) Gallery
CICS has had an amazing team of people who have served Calderdale, its schools, churches and young people in so many creative and pioneering ways over our history. Each one has added an amazing and new dynamic - here is the staff gallery...
Our History of In-Form
CICS has regularly produced in-form to let supporters know what is happening - here are the copies of in-form from Issue 1!